Different Forms of Art in I Am Sam 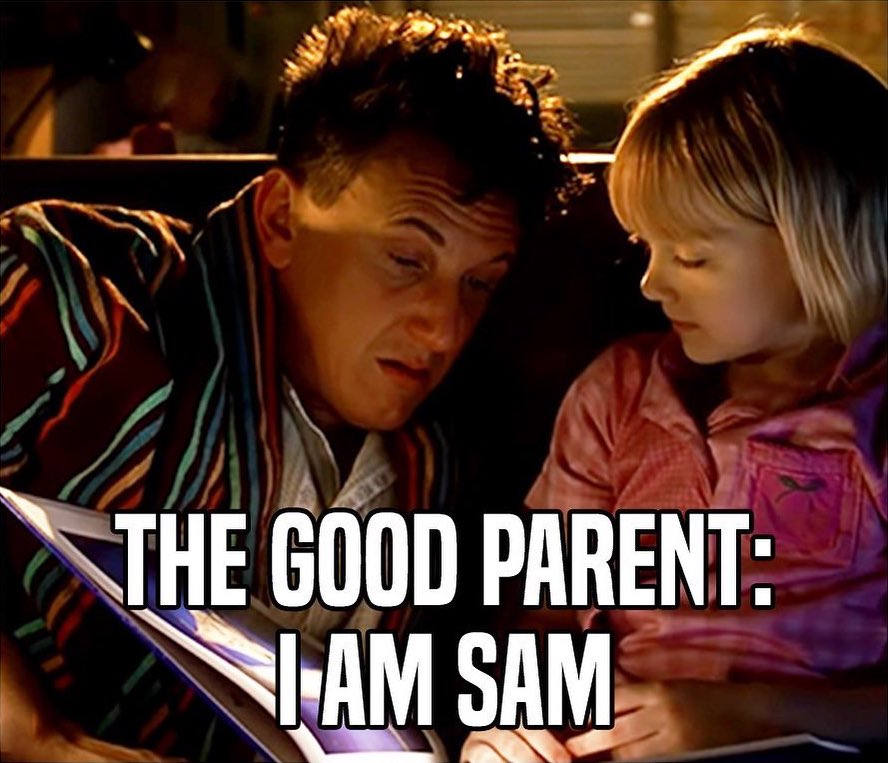 I Am Sam is the story of a father’s fight to win custody of his daughter. Sam (played by Sean Penn) has an intellectual disability, but that doesn’t stop him from being everything his loving daughter, Lucy (played by Dakota Fanning) needs. The film mainly explores the familial love and parenthood, particularly what it takes to be a “good” parent. A major element in the film is art. Here, we discuss the ways in which different art forms are used in regards to the theme of the film.

In the drawing, Lucy is drawn a few times bigger than Sam. This can signify Lucy is the one taking care of Same most of the time, instead of the other way round. We can also tell Lucy puts in an enormous effort coloring the blue background, while other kids leave their background blank. Not only can this display Lucy’s patient personality, but the blue background might also symbolise how the sky (ie. freedom) is important to her (Lucy in the sky with diamonds). We can also see two yellow school buses and the sun. These objects that stand out from the drawing may signify warmth and comfort Lucy sees through her eyes in her everyday life.

Don’t the rooftops look like patterns of ladybugs? Earlier in the film, Lucy asks Sam, “Are ladybugs only girls or are there boys, too?” she also asks “Do you think she’ll (mother’ll) ever come back?” This may represent how Lucy questions the coexistence of both parents/gender, but also longs for motherhood. She expresses it through her painting. The patterns being the roofs of the houses may also signify that mothers are key component to the shelters of their homes. Without them, the houses will not serve their purpose of protection and warmth. Towards the end of the film, Sam exclaims to Randy, “Because I think you’re the red in her painting” as he begs Randy to help him raise Lucy as her mother.

2.The 50 WordsThe vocabulary of Green Eggs and Ham consists of just 50 words, and is very simple, repetitive, rhythmic. This can explain why Sam is able to read (or memorize) and recite the whole book without a problem.

Green EggsWhat can the green symbolize? Eggs are suppose to be in yellow. Could the abnormality be a representation of Sam? Is the book/film asking the audience to accept the minorities?

The choice of children’s book with birds and bats as the main characters also strengthens the symbolism of birds and freedom in the film.

From the very beginning, we learn that Sam is a fan of the Beatles. After all, he names his daughter after one of their songs. He takes lessons and inspiration from the Beatles’ life story. Given his intellectual disability, Sam often encounters difficulties in expressing himself eloquently. Thus, whenever he tries to answer a difficult question or wishes to convey a deep message, he turns to The Beatles. For instance, when Lucy asks him if her mother will ever come back, he replies with an anecdote of how Paul McCartney and John Lennon lost their mothers at a young age. “God picks special people” he says. Another instance is when Rita confesses that she isn’t doing enough for Sam as his lawyer. He gives her a pep talk by using how George wrote “Here Comes the Sun” as an allegory, where the moral of the story is to never give up. He also quotes lyrics from the Beatles to express his deep thoughts. This can be seen when he asks Randy to co-parent Lucy with him. He tells her “Help, I need someone, help, not just anyone.”

A notable Beatles reference is the shot of Lucy, Sam and his friends crossing the road. It resembles that of the Beatles’ Abbey Road album cover. Given that the Beatles were a band of close friends, this shot reflects how tight-knit this group of friends are, almost as though they form their own band, or better yet, their own family.

Throughout the film, Sam and his friends make paper cranes out of newspaper which are often littered around in Sam’s apartment, Lucy’s bedroom and even at the diner’s table. Consequently, Lucy grows fond of them and even requests 100 origami birds for her birthday. Origami cranes are a prominent symbol of the father-daughter relationship between Sam and Lucy. It is a physical representation of their bond and love. It is something that Lucy and her father share. For the Halloween parade, while the other kids dress up as their favourite character, Lucy dresses up as an origami bird made of coloured paper. This demonstrates how important her father is in her life. Moreover, children tend to imitate their parent’s behavior, and Lucy is no different. In her “I’m stupid” statment, she yearns not to be so different from her dad. Hence, she follows her father’s habit in making origami when she tries to make a paper crane at the Hamburger diner. The origami bird also acts as a reminder of their relationship. In a particular scene in the second half of the film, Lucy is walking to school with Randy, her foster parent. Meanwhile, Sam drops an origami bird from a tree, which Lucy notices and picks up. Though she may not see her father, she can feel his presence and his love.

Additionally, cranes are associated with happiness in Japanese culture and flying birds connotes a sense of freedom. When Sam and Lucy are together, they are undeniably happy. Notably, the origami cranes or birds are present whenever Sam and Lucy are together. For example, in the park montage at the beginning, a flock of white birds flies across the screen. Lucy and Sam are playing on the swings, seemingly flying across the frame. They are happy and carefree. In contrast, when Lucy is separated from her father and taken into foster care, hardly any birds or origami cranes can be seen. This could reflect the restriction, separation and sadness that Lucy and Sam feel. Prohibited to be together by the institution, they lose their freedom to be with each other. Lucy is trapped in foster care longing to be reunited with her father, while Sam is stuck in a legal battle for his rights to take care of Lucy.

Birds also represent Lucy. Sam names his daughter after the Beatles song, “Lucy in the sky with Diamonds” so it is apt for Sam to make an origami out of a creature that can fly for Lucy. In Japan, the crane is perceived as a symbol of hope and healing during challenging times. In the film, Lucy emanates hope every time she waits to see her father. She is the hope for Sam to keep fighting for her. Annie even remarks that Lucy smells like milk and hope.

Origami is also used to project Sam’s consciousness. When he feels like he lost Lucy to a new family, he builds a wall out of origami bricks, in order to block out the world and the pain he feels, thereby isolating himself. Only when Rita comes in and tears down his walls quite literally was she able to bring Sam back and continue the fight for custody.

What other art forms/paintings could you find in the film? What could they mean?