James Gunn revitalized The Suicide Squad with his rendition of this anti-villain action flick released this summer. Compared to its 2016 prequel, this one certainly got us laughing and awestruck at the visuals (and rooting for King Shark’s dumb adorability)as we left the cinema. With its diverse, colourful (personality-wise at least), complex and at times chaotic characters, the film got us thinking: what makes an anti-villain?

Truth is having a plain, old-school evil-for-the-sake-of-being-evil bad guy has become boring and dull. What makes a captivating antagonist is depth and their imperfection. It makes these characters seem more real and believable. Villains deserve the same attention and investment as heroes do.

Most would define anti-villains as characters who possess personality traits, virtues and even altruistic goals that are not quite different from their heroic counterparts. What distinguishes them is often their means in achieving their goal, which may be what the norm would consider illicit or unjust. A popular example is Thanos’s plan to rid half the population to save the universe. Like most characters, anti-villains come in different shades. This is something we inevitably see in the different members of the Suicide Squad:

This anti-villain originally started out as a good guy, but after being exposed to a situation where he or she has been pushed past their comfort zone or personal limits, they eventually turn into a villain. Robert DuBois, a.k.a. Bloodsport is an example of this trope. He was a soldier drafted into the Vietnam War but evaded his duties due to his fear of dying. When his brother took his place and unfortunately lost all his limbs, he became guilt-ridden. In this fragile state of mind, Lex Luthor conditioned him into the assassin who attempted to murder Superman with a kryptonite bullet, landing him a barred room in Belle Reve.

Despite being a skilled assassin with a tough demeanour, he is compassionate and is willing to sacrifice his life to do what’s right. He even becomes a father figure for Ratcatcher. By the end of the film, he turns into a leader who will not leave his team behind.

Harly Quinn is another example of this trope. From the first movie, we learn that Harleen Quinzel was a psychologist who fell in love with the wrong man. In her scheme to prove to the Joker that she loves him, she jumps into a tub of acid and transforms into the icon Harley Quinn. Now, Harley is gradually turning to the right side as she becomes aware of the toxic and villainous men in her life. In the meantime, Quinn is making a statement in female film history.

Arguably, most if not all anti-villains can be sympathised with, especially when they are a given a sad and/or tragic backstory. The power of these backstories allows us to see them less of an intimidating tyrannical evil mastermind, and more of a deeply flawed character with issues we can either relate to or at the least incites us to feel bad for them. Sometimes, these backstories in some way tries to justify their actions.

The sympathetic anti-villain created by circumstance or are born in an unfavourable environment, which is the reason for their villainy. Oftentimes, when we encounter these characters we wonder how things would be different if they had a better upbringing or life. An example of this trope is sweet and empathetic Cleo Cazo, otherwise known as Ratcatcher 2. With her kind nature, it’s hard to imagine she could do evil. However, Cleo was born into a life of criminality as her father (portrayed by Taika Waititi), was a drug addict and a thief. After his death, she followed her father’s footsteps using her ability to control rats to commit crime.

We don’t learn much about Starro the Conqueror, the final boss enemy in the film, before he was captured by American astronauts and spent the rest of his life being experimented on. We know that his intentions are to conquer Earth (and maybe revenge?) Yet, his memorable last words, “I was happy floating staring at the stars” suggests his villainy is a product of terrible and unfortunate circumstance. If it weren’t for the astronauts and the Thinker, would he have done harm?

Another example is Polka-Dot Man. He’s the least villainous amongst the group. He is a result of his mother’s cruel experimentation, in her endeavour to make superheroes. After his mom infected him with an inter-dimensional virus and experimented (and killed) his siblings, his PTSD turns into hatred and vengeance. Though not a born killer nor have a desire to murder, he admits the only way he can kill is if he imagines his mom on his enemy’s stead, he manages to destroy them. He’s the closest to a good guy in the amongst the squad. He even claims, “I am a superhero” before his untimely death. I guess there’s no room for heroes in the Squad.

This hero, I mean anti-villain, wants to protect their country and/or save the world, and they don’t care if they have to kill or destroy along the way. Peacemaker, portrayed by John Cena, is the perfect example of this well-meaning anti-villain. His entire character and personality are an irony and that’s essentially what this trope is. A line that best summarises his character is “I cherish peace with all my heart. I don’t care how many man, women or children I kill to get it” On the surface, everything about Peacemaker screams hero. For instance, his muscular physique, his fearlessness, and even his values. However, the violent means to achieve his goals is what puts him on the dark side. He was even willing to betray and kill his teammates in order to complete his mission.

Baddie turned good. Sometimes it only takes a little kindness to turn someone bad into good. For the adorable invincible hunmanoid shark, Nanaue, voice by Sylvester Stalone just wants to have friends. Though he may appear simple-minded, do not underestimate King Shark’s strength. He is deadly and constantly hungry. However, after Cleo shows kindness and offers a hand of friendship to King Shark, it is revealed that King Shark isn’t necessarily a heartless killing machine. He cares and wants to have friends.

Consider Peacemaker and Bloodsport. They are the two most similar members of the squad superficially. In fact, Amanda Waller gives them the same description of their skills, even after stating that every member is chosen for their unique abilities.

This moment is a red flag that something isn’t quite right. Later, we find out Waller’s true intentions. Peacemaker had a different mission: destroy evidence of the US government’s involvement in Project Starfish even if it means betraying his team. This is where perspective comes into play. With a title like The Suicide Squad, we can deduce that the film promotes the value of teamwork, friendship and the like. Thus, acts of betrayal opposes those values and poses as an obstacle to the protagonists. That being said, the story is about the Squad, Bloodsport and his team are the protagonist. Their decision to save the city of Corto Maltese and defy government orders is their heroic moment. In other words, they are the hero of the story. That puts Amanda Waller and the Peacemaker as the antagonist. Patriotism and loyalty are not worthy of demerit but since their methods of achieving their goal to protect their country, allowing the massacre of innocents and the murder of a genuinely good-hearted soldier (RIP Colonel Flag), are undesirable and opposes that values of the Squad, they are perceived as the circumstantial villains in the film. In othe words, the patriotic characters as the bad guys while the ones who betray their country are the good guys. However, if the tables were turned, let’s say the movie is about Amanda Waller and patriotism, then perhaps the Task Force X would be seen as the antagonists.

If an anti-villain is a villain with redeemable qualities, the anti-hero is its opposite: a heroic character without the conventional qualities of a hero. This best describes Amanda Waller’s character. She has strong principles and dedication to her country, but at the same time she is an isolated character. Her goals are more selfish, as she is willing to go to extreme, questionable means to achieve her goal and save her career, which makes her not too different from Peacemaker, thereby making her the perfect “soldier”. She uses Bloodsport’s daughter to blackmail him and lets the first Squad die in combat as a diversion to get tactical advantage. She shows little care or consideration for innocents when they belong to an enemy country. Contrary to the comics, Waller in the film is portrayed to be more antagonistic in the film. The reason why Waller is considered a “hero” is because she’s working for the “good” side, i.e. her country.

The geneticist Gaius Grieves, otherwise known as The Thinker. Sly, manipulative, self-preserving and intelligent. Everything about him screams villain. His torturous experimentation on Starro is what drove him to revenge and conquer the Earth. It was even hinted that he might have had sexually abused him…”Had his way with him”

If we have to name the biggest antagonistic figure or entity, we would argue that it’s the government, rather than Starro. They were involved in Project Starfish and when things go awry, they do not take responsibility. Instead, they try to cover up traces of their involvement. And we all know Amanda Waller and Peacemaker are their pawns.

Gunn likes to place titles that blends with the environment in the background to denote a new chapter in the story, or location. With this in mind, notice how at the very beginning of the film we are introduced to the first squad that will eventually be slaughtered at the beach of Corto Maltese. During their slow-mo walk, where we get an overview of the team, with a tinge of epicness, the American flag covers the entire background. This shot reveals the government’s ownership over the squad as they carry out their orders regardless if they knew their true intentions. This also foreshadows the major plot twist in the film, that the America government was behind Project Starfish.

In contrast, we during Task Force slow-mo walk, their background is covered with white fog, indicating that this squad has no affiliation with any government. White could also suggest goodness and light. After all, they defy their government to protect innocent lives.

Anti-villain and anti-hero tropes stem from the desire to tell a story with complex characters, where no one is inherently bad or good. It deviates from canonical literature, where good and evil are portrayed as black and white. Rather this trope reflects how discerning between the two is a matter of personal perception, morals and values. Films with these multi-layered characters, while most of the time entertaining, also gives us hope that even the worst of us has a chance to be good. 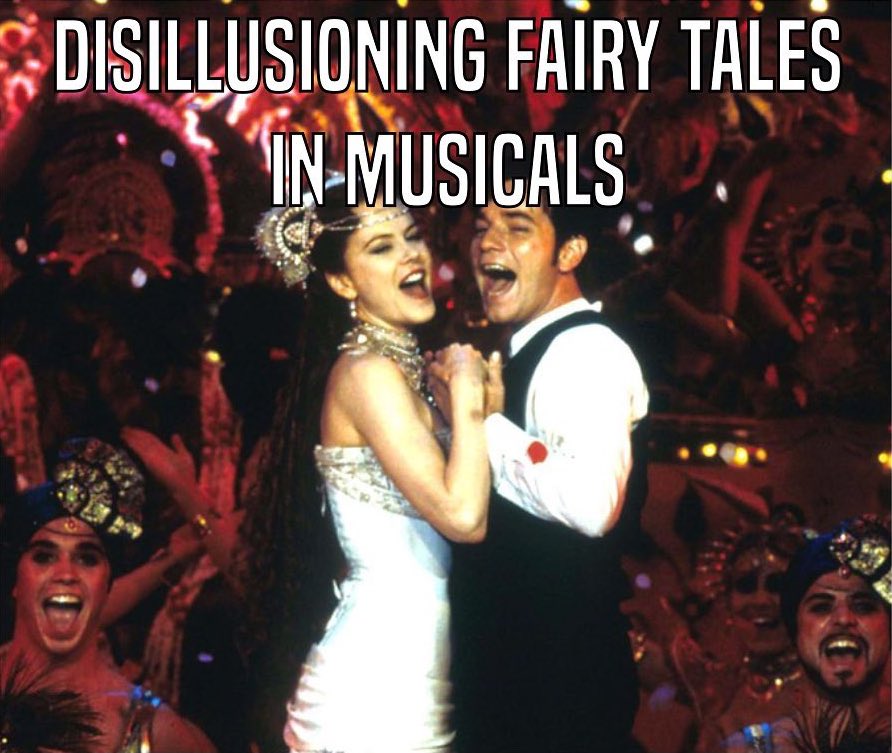